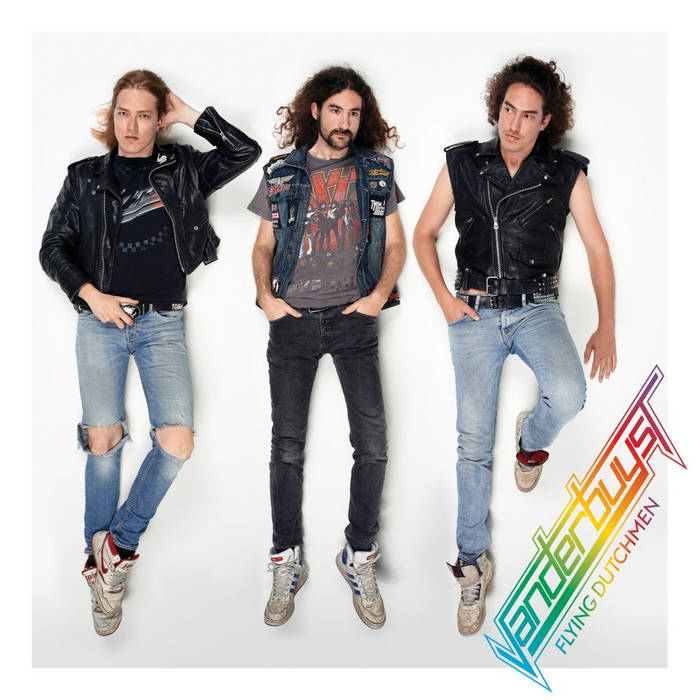 The guys from Vanderbuyst discuss their latest album: FLYING DUTCHMEN

Frivolous Franny
Willem: An uptempo track, that kicks off with an intro that gets your attention right away. Barry: A typical Vanderbuyst hard rock song with other influences like blues and even country. I like the finger-picking lick. Jochem: The lyrics are about innocence versus the toughness of the world. Or maybe, whims versus structure. I think you can hear that in the music too. How you can’t control your evil impulses. And in this particular song, the three authorities in society -the priest, the doctor and the police man- fail to stop the sick mind.

Waiting In The Wings
W: I realize we’re more a hard rock than a heavy metal band but this track is very heavy metal. B: Indeed, the theme is heavy metal throughout. We’re put on this world to fight, if we want to or not. The moment we are born the training program starts. J: Your time will come, and you’re ready, you’re just waiting to strike. W: In this song there are a lot of layers. You have many background vocals and guitar fills, which make it quite bombastic. B: We really used the opportunities a good studio offers for this one. J: It’s a very intense song to play; you need to give everything you got to pull it off. B: It’s a train that keeps on rumbling. At the end you’re gasping for air. And then we have the ballad.

Give Me One More Shot
B: A love song for the ladies. W: A theme and a feeling everybody will recognize. B: Women will feel addressed and hope that the song is about them. J: The most important is the feeling or drama the lyrics and the vocals evoke. The music is just there to back this up. W: One could argue that “Where’s That Devil” (from the IN DUTCH album) is more a slow blues, but “Give Me One More Shot” is definitely a ballad.

The Butcher’s Knife
J: The lyrics deal with a recurring theme: being blinded by religion. B: It’s a criticism on society. We want to be individuals but we’re afraid to think for ourselves. J: Just follow the pack. W: The music has an 80’s feel; it is almost danceable. The melody is dark -doomy if you like- but still has a lot of energy. B: The music is threatening in some way.

Tears Won’t Rinse
J: I like the lyrics. It’s about paying for your sins. About taking your consciousness serious. If you commit an immoral act you have to carry the burden. W: Yes, you can say that you’re sorry but you need to feel real sorry. Crocodile tears won’t do. J: Somehow the music reminds me of the Scorpions. They too have songs with a second chorus after a first chorus. Something like a pre and a post chorus. This song structure is quite new for us. W: It’s one of our fastest tracks but in the end is still laid-back. I mean the solo is quite bluesy. B: I remember Pieter Kloos (the co-producer) had a big role in this track. W: He came up with great suggestions. I believe the pre/post chorus was his thing.

Never Be Clever
J: A song from Herman Brood. He was a real Rock ’n’ Roll hero in the Netherlands. In this song he describes his life; his drug-addiction and suicidal tendencies. B: It’s an ode to his way of life. J: A bit like Lynyrd Skynyrd’s “Simple man”: be who you are. W: He was one of those true rebels that refused to confirm to what people said. J: We tried to make the song a party, a celebration, and make the main riff more Vanderbuyst. B: A rock and roll disco stomp, I would call it. W: Still everyone will recognize the original in it.

In Dutch
B: Huh? This was the name of our previous record, no? J: This track is the glue between our second album and FLYING DUTCHMEN. W: It’s really uptempo; the solo was quite a challenge. J: The bass is really thundering underneath the guitars. It has the same punk attitude like “KGB” (from the IN DUTCH album). B: But in the chorus the sky clears with harp-like guitars. J: It’s about catching someone red handed. While having the patience to let that person commit the crime, so he thinks he’s smarter than you are. But in the end the punishment comes with humiliation.

Johnny Got Lucky
W: Again a criticism on religion. In combination with those school-shootings you have nowadays. B: A mid-tempo rock track. Right from the start heads go up and down. J: A “Dr. Feelgood” (Mötley Crüe) groove. The riff kind of forces you to move. B: The main-riff gets in your head right away. It also reverts to soul, like Motown stuff. W: Selim Lemouchi (from The Devil’s Blood) did a part of the solo; the very speedy part. J: Reminds me of old heavy metal where guitarists are swapping solos.

Flying Dutchman
W: That was the first track we did in the studio of which we realized we could do a lot more than just record the basics. B: Like the nice baritone guitar in the chorus. J: The song has a natural start and layers are added each step. B: A song written by the book. A blueprint pop-song. You can sing along halfway the first chorus. Again one of those songs with a happy feel while the lyrics are not happy at all. J: You feel the victory but that’s not what we sing about. On the other hand if you accept your fate, you can go downhill with full power as well.

Welcome To The Night
W: Again Selim joined us for some soloing. B: In the beginning you have these toms building up tension. Two different rhythms that create an exciting feel. Suddenly the song turns into a shuffle. J: The shuffle is the moment the song turns into a party. It’s about doing things you are not allowed to, but you want to very badly. And in the end it will mean your fall. W: It reminds me of “Never Be Clever”; whatever people say, you will have that party anyway. J: “Welcome To The Night”, is that time of the week when we can let ourselves go and do all what God forbids. In the end things go wrong. B: It’s about sex, life and death. In short, about rock and roll.

Bandcamp Daily  your guide to the world of Bandcamp

Serena Cherry debuts her black metal project, plus a Pick from the Crypt block from Svalbard